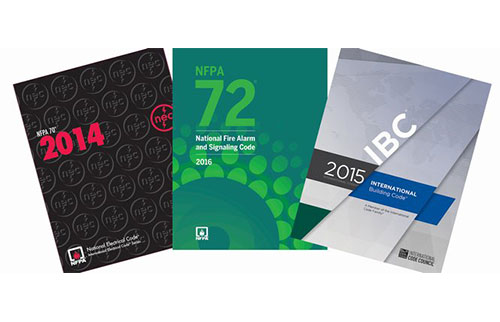 NICET will be transitioning to newer codes in their exams in “mid-October 2018”, specifically:

While it is likely NICET will continue their policy of allowing any edition into the exam, having the specific edition that NICET is testing on will yield better results.

Chapter 23 changed the requirements for SLC’s (addressable) circuits from a single fault affecting no more than 50 devices to the loss of no more than one zone. Annex A further explains that a zone can be designated by floor, by floor area, by fire or smoke barrier, and maximum circuit length.

Chapter 23 now requires that multiple interconnected fire alarm control units be resettable from a single location, with the reset procedure document at each control unit and annunciator. It also requires AHJ approval for resetting and silencing from other than protected premise.

Chapter 24 added new mounting requirements for Local Operating Consoles (LOCs) for emergency communications systems based on the mounting height and horizontal reach. Mounting 36-48” AFF is permitted when reach is less than 10”, while 28-42” is required when reach is 10 – 24”.

Chapter 24 added a section for Stairwell Communications system (as required by other codes). Remote call points are typically located every fifth floor where the doors are locked. The system may be integrated with other two-way emergency communications systems, such as area of rescue and elevator emergency communication). The remote location and central control point requirements are very similar to those for area of rescue.  Remote stations require braille signage and audible/visible call indication, and central control must communication off premise of not in a constantly attended location.

The IBC also clarifies that smoke detectors are an acceptable alternative to smoke alarms in sleeping or dwelling units when they are part of a building fire alarm system, activate notification in the unit, and does initiate notification outside the unit.

The NTC Orange Book (Fire Alarm Code Handbook) covers both editions of the fire alarm codes, and highlights changes between editions. The Orange Book is an excellent reference for identifying code requirements and changes, as well as understanding the codes. The NTC Brown Book (Fire Alarm Systems Handbook) explains fire alarm systems and code requirements in plain English and is loaded with pictures and illustrations.