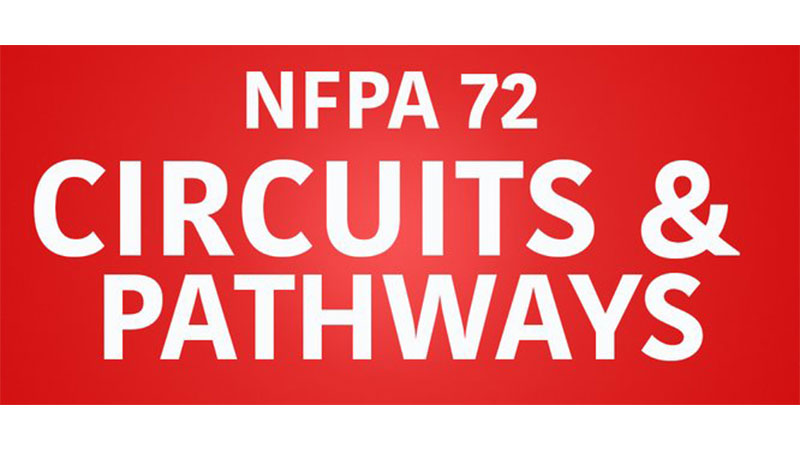 NFPA 72, National Fire Alarm and Signaling Code, defines the performance of fire alarm circuit and pathways in Chapter 12. While the terms “circuit” and “pathway” are often used interchangeably, they are different. A circuit is defined in Chapter 3 as “either means of providing power or a connection path between locations”, while a pathway is “any circuit, conductor, optic fiber, radio carrier or other means connecting two or more location.” Basically, a circuit is copper, while a pathway can be copper or any other type of connection.

The primary identifying factor of a Class A pathway is a redundant path. Class A pathways go out from the fire panel and return to the panel on a separate pathway. A circuit that is wired in Class A will have a pair of wires going out from panel, through all the devices, and returning to the panel to a separate set of terminals. The redundancy of a Class A pathway allows it to perform under more adverse conditions. For example, all devices on the pathway will continue to operate with a single open.

Class B is the most common type of pathway on fire alarm systems. A Class B pathway does have a redundant (return) pathway, so any equipment located on the circuit or pathway past a single open will not operate. Class B conventional circuits go through all devices and terminate in an end of line resistor (EOLR), which provides electrical supervision of the circuit. Class B signaling line circuits (addressable) do not have an EOLR but are supervised and annunciated by individual devices.

Class C pathway provide one or more pathways where operational capability is verified by end-to-end communication, but the integrity of the pathways is not monitored. An example of Class C would be a cellular or IP communicator. The pathway for the signals from the protected premises to the supervising station are not supervised, and the signal may take multiple routes to the destination. Supervision is performed by verification of receipt by the supervising station.

Class D pathways are fail-safe. The pathway itself is not supervised, but the intended function of the pathway is performed in the event of the failure of the pathway. Prior to the 2010 edition of NFPA 72, Class D pathways simply referred to as “fail-safe.” A typical application for a Class D pathway is a powered relay used for door release or fan control. Since the relay is powered in normal condition, operation of the relay is accomplished by removing power by control panel operation, or by a failure of the circuit.

Class E pathways are not monitored for integrity and are used in applications where supervision is not required. Section 12.6 of NFPA 72 defines applications where monitoring for integrity is not required. Some examples include interconnection between equipment in an enclosure, interconnection between control equipment within 20 feet of each other where conductors are protected by conduit, and interconnection wiring of a stationary computer to its keyboard, monitor, or mouse where the wiring does not exceed 8 feet.

Class N pathways were added to NFPA 72 in the 2016 edition to cover network (Ethernet) equipment for fire alarm. Since traditional Ethernet pathways do not meet the supervision requirements of traditional fire alarm circuits, the Code adds additional requirements to make the circuits more equivalent by requiring redundancy (two Ethernet circuit) in the pathway. Since Ethernet uses a homerun wiring configuration, wiring to individual devices (endpoints) only requires a single circuit.

Class X pathways are essentially Class A pathways with isolation capability (short circuit protection) between each device. In Class N circuits short circuits are isolated, allowing the remainder of the circuit to function normally. Isolation of the circuit is typically accomplished with a fault isolator, which may be a module or built into the device. Isolation capability of Class X provides an extremely high level of reliability of the pathway, but also at a significantly increased cost as isolators are required for each device.