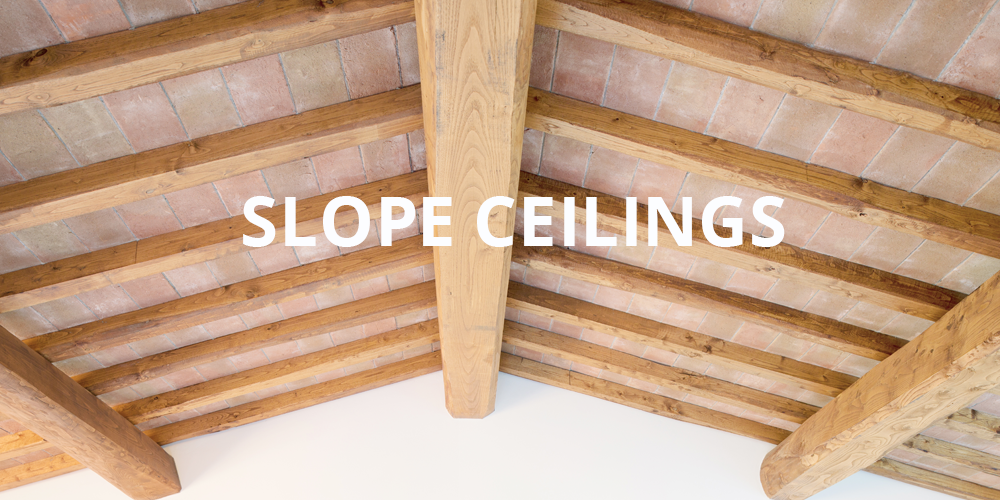 Ceilings have a direct impact on detector spacing and location. This impact directly affects smoke and heat detectors, so an understanding of ceilings and their impact is a critical aspect to fire alarm design.

The expression of slope in this form shows the relationship of amount of rise over a specific travel distance (commonly called “rise over run”). A slope of 1 in 8 means that the ceiling rises 1 foot for every 8 feet of distance. The longer the distance to rise, the shallower (narrower angle the slope). A slope of 1 in 12, for example, would not be considered a sloped ceiling.

NFPA 72 further defines sloping ceilings as peaked and shed. A peak ceiling slopes in two directions from the highest point. A shed ceiling slopes from one side towards the opposite side.

NFPA 72 requires that the first row of detector on a slope ceiling be located within 3 feet of the highest point of the ceiling. In the case of a peak ceiling (which slopes in two directions) this can be on either side of the peak. The remaining detectors are spaced based on a horizontal project of the ceiling.

A horizontal projection of the ceiling requires that the spacing measurement be along a level surface (the floor), rather than down the slope itself. Essentially, detector spacing is determined by measuring along the floor, and then drawing an imaginary line up to the ceiling for detector location.